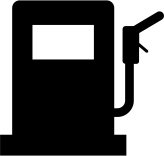 1985 BMW K100R5 "What are we going to do?", said the engineers at the BMW motorcycle division. The year was 1979 and sales and market share of the R100S were dropping dramatically. Blame it on Honda - the introduction of the CB750-4 in 1969 created a revolution in the motorcycle world that is still felt today. This affordable bike featured a vertical four cylinder, overhead valve engine that was smooth, powerful, and reliable. Yes indeed, the Japanese bikes had grown up. The "boxer twin" engine design that had powered the BMW line for many years became instantly obsolete. Instead of relying on customer loyalty to an outdated engine design (sorry Harley fans), BMW decided to compete in this new era focused on power, speed, and handling. What emerged in 1983 was a liquid cooled, horizontal, overhead valve, four cylinder powerplant that became known affectionately as the "Flying Brick". At 984 cc and 90 horsepower, it was to date the largest displacement and most powerful motor BMW had ever produced yet it still retained the smoothness and quality of manufacturing that the brand was famous for. Loyalists were slow to embrace this new direction that BMW was taking, but sales soon soared and the K100 line remains one of the most popular bikes BMW ever made. An added bonus was that this bike proved to be very reliable and required far less "tinkering" than the older bikes. The K100LT was a comfortable touring model capable of long range, problem free excursions. The Ki line that followed in 1993 carried on the legacy of quality engineering and manufacturing that BMW is known for to this day. At Bavarian Motorsport, we are offering a rare find - a 1985 K100RS showing only 4,019 miles. The sport fairing, fuel tank, and body panels are finished in Madison Silver Metallic and an optional tank bag is included. Please contact Suzanne 610-444-2222 We welcome car trades!

We proudly offer a $0 processing fee


Tax, tag and title fees are not included in advertised price. All pricing and details are believed to be accurate, but we do not warrant or guarantee such accuracy. Vehicle information is based off standard equipment and may vary from vehicle to vehicle. Call or email for complete vehicle specific information.

All information is deemed reliable but not guaranteed. Please contact the seller via email or call them to confirm all information including vehicle availability prior to your visit. Neither shopautosonline.com® nor our advertisers are responsible for typographical errors, mistakes, or misprints, including but not limited to: pricing errors, individual vehicle disclaimers, finance options, or an incorrect statement of features and/or accessories of a particular vehicle.

Financing and Payment Calculator - The seller has the right to cancel or reject your application at any time. Estimated monthly payments do NOT include license, title, dealer, emissions or other possible fees, and sales tax. All loan figures are based upon non-commercial usage and are subject to credit approval. The accuracy of these calculations are not guaranteed nor is its applicability to your individual circumstances. This calculation is based on the information you entered and is for illustrative purposes only. This calculation reflects amounts in U.S. Dollars rounded to the nearest whole dollar. You should always obtain personal advice from qualified professionals. Use of this application is subject to our terms of use. Enter your mobile phone number below, and we will text you right back. You can opt-out anytime by texting STOP.